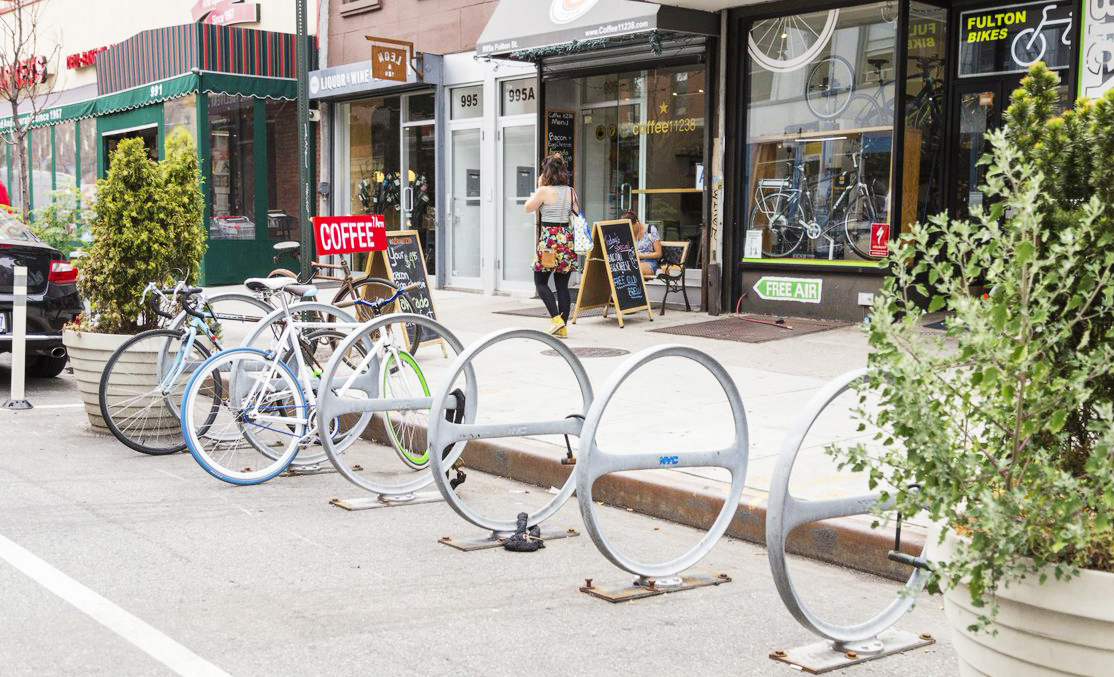 New York City Department of Transportation (DOT) crews installed bike parking racks along Bronx Park East in the Pelham Parkway section in March – the beginning of a project that Commissioner Hank Gutman says will include 10,000 racks by the end of 2022. This is more than triple the City’s current “Green Wave” commitment.

“DOT is not just committing to accommodating the city’s cycling boom with more accessible bike parking, we are pairing these bike racks with major bike lane and safety improvements,” said Gutman.

The six bike racks installed in March are along Bronx Park East at two major intersections, Unionport Road and Bronxdale Avenue – both with direct access to the Bronx River Greenway. DOT also installed new racks in the Bronx neighborhood of Pelham Bay, with plans for additional racks in all five boroughs. The city currently has over 28,000 bike racks, for about 56,000 bike parking spaces.

In February, DOT announced that the eastern Bronx had been selected as the pilot zone for the City’s first-ever e-scooter share pilot. Gutman underscored how the planned pilot will offer a new shared mobility option in eastern Bronx neighborhoods from Eastchester and Co-op City to Throggs Neck and Soundview.

The pilot will allow DOT to see how e-scooter share works on City streets for the first time and will require that companies operate in alignment with the City’s Vision Zero and equity goals. The pilot, expected to launch in the late spring, will run for a minimum of one year. Allerton and Pelham Parkway are included in the pilot, with Bronx Park East serving as the western boundary of the pilot zone.

“I am happy to hear that the DOT Commissioner’s ambitious goal to install 10,000 new bicycle racks by the end of 2022 is well underway,” said Council Member Ydanis Rodriguez, Chairman of the Transportation Committee. “We must continue expanding these initiatives and work towards becoming the most sustainable, pedestrians and cyclist friendly City in the Nation.”

“Bike parking signals that cycling is safe, welcome, and available for New Yorkers,” added Danny Harris, Executive Director of Transportation Alternatives. “We are glad to see Commissioner Gutman and NYC DOT taking the first steps to deliver 10,000 new bike parking racks… which [aligns] with our NYC 25×25 vision to give more street space to people and help us reach our Vision Zero goals.”

Opportunities to Get Vaccinated in NYC Improve, But New Problems Arise