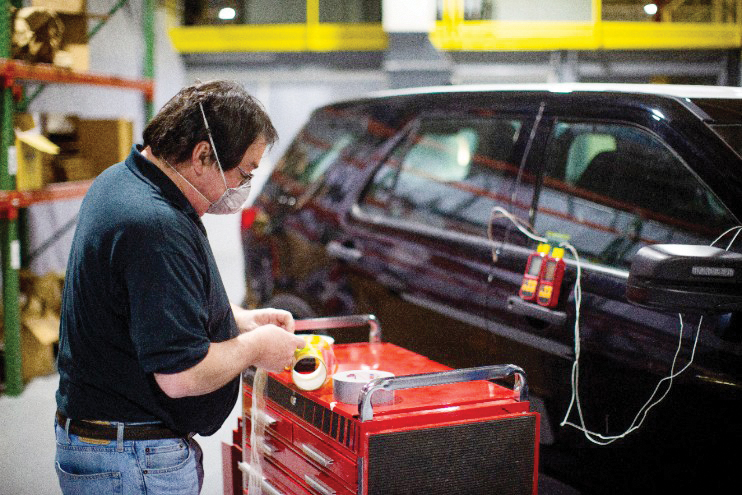 In response to New York police officers concerned about the coronavirus, Ford announced in late-May that it would be launching a readily available “heated sanitation software” technology that essentially cooks away viruses inside 2013-19 Police Interceptor SUVs. Ford tested the new software in vehicles owned by the Michigan State Police, New York City Police, and Los Angeles Police, and the agencies are now using the technology, confirmed Elizabeth Kraft, a Ford spokeswoman. The new technology heats vehicles “beyond 133 degrees Fahrenheit for 15 minutes – long enough to help disinfect vehicle touchpoints,” Ford said.

A team at Ohio State University helped figure out the temperature and duration of time required “to help inactivate” COVID-19. The team found that exposing coronaviruses to temperatures of 56 degrees Celsius, or 132.8 degrees Fahrenheit, for 15 minutes reduces the viral concentration by greater than 99% on interior surfaces and materials used inside Police Interceptor Utility vehicles.

The heat spike is generated by the new software, which allows the vehicle to engage the power train to run a higher idle than it’s otherwise able to do without the software, creating more heat to be transferred to the cabin. Ford is looking to make the software available in other police vehicles.

When the heat process has begun, “hazard lights and taillights will flash in a preset pattern, then will change at the end to signal completion.” The instrument cluster will also indicate progress. A cool-down process brings the temperature down, Ford said. The heat sanitizing process is NOT done with people inside the vehicle.

Ford engineers began studying the heat decontamination project in late March. Their heat cleaning efforts may help disinfect vehicles between passenger use. The self-cleaning mode adds an extra layer of protection inside the vehicle, in areas where manual cleaning is prone to be overlooked.

Some police department service centers can install the software, while other agencies will need to work with local Ford dealers: For 2016-19 police vehicles, the heated software process can be activated by a sequence of commands that involves pressing cruise control buttons in a predefined order. For 2013-15 vehicles, this mode can be activated and carried out through an external tool that connects to the onboard diagnostics port.

This high-temp strategy, when combined with cleaning guidelines approved by the Centers for Disease Control and Prevention, “can help reach areas that may be missed by manual disinfecting procedures. Heat has the ability to seep into crevices and hard-to-reach areas, helping reduce the impact of human error in applying chemical disinfectants,” Ford said.

Ambient temperature, installation of partitions, or other equipment such as radio systems, computers, and other electronic safety and lifesaving equipment common to police vehicles may impede temperatures from reaching the recommended threshold, Ford admitted. The impact of high temperatures on vehicle interiors or their electrical equipment was not part of the study.