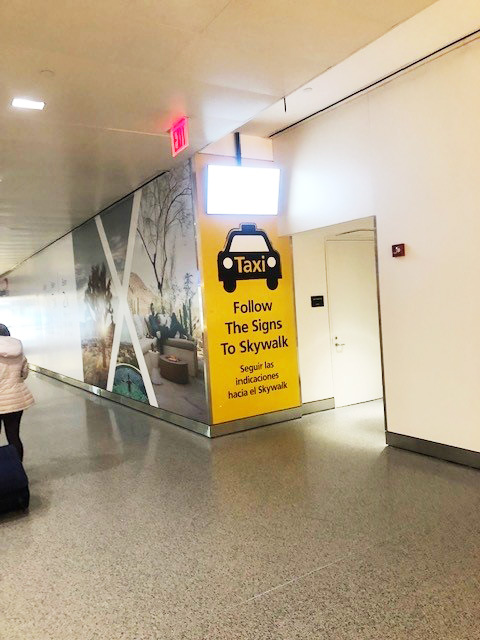 Enclosed is a photo of the only sign for yellow taxi instructions at T5 JFK. I just traveled back from vacation with Jet Blue and this was only sign giving the riding public information about where yellow taxis are located. Then, a passenger needs to walk approximately two miles to the taxi line. I’m in great shape and even I had to catch my breath. What about a person/family with four pieces of luggage? This is unacceptable!

Why not place the taxi line at the CARGO AREA? Of course, tourists will get deceived by fake drivers… tourists don’t see the beautiful bright yellow vehicles. This needs to change on the new city JFK proposal.

“I still love my green cab to this day, but it’s been really hard, you know. We started off with many, many thousands of green cabs, and we’ve just lost so many over the years.”

Instead of Congestion Pricing, Charge Uber

When Uber started, de Blasio folded, even though he had promised the taxi industry he would fulfill his charter-mandated responsibility to protect the yellows. Instead, the city allowed Uber to operate in Manhattan, steal the yellows’ business as well as MTA bus rides all over town… Governor, if you want a half a trillion dollars per year for the MTA, charge the Ubers. Sell “permits” like medallions to the Ubers and charge them the $15,000 per year the city charges the yellows. All you have to do is enact a law. This, not the congestion pricing plan on the table, may actually reduce traffic.

Buses Got Slower Under de Blasio

In early November, lightning struck. A three-way bargain was forged between the city’s municipal government, a private equity firm that had become the single largest taxi medallion creditor, and an advocacy group that spoke for thousands of taxi drivers which had the likes of Kirkland and JPMorgan as their pro bono advisers. The deal slashed loan balances, which for some had previously exceeded $500k, to just $170k allowing drivers to make more manageable monthly mortgage payments. The city stepped in as a backstop party to ensure that private lenders would remain shielded from future default.

Suspect Arrested for Fatal Shooting of FHV Driver in Harlem

10 Crucial Reasons Your Kids Should Be Vaccinated

Protect Your Brakes: Beware of Moisture in Your Brake Fluid